Review: Before He Was Famous 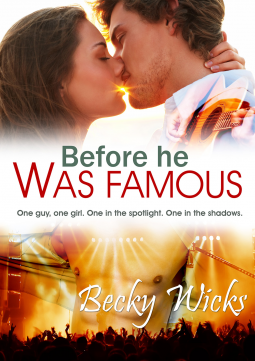 Before He Was Famous

Falling in love with your best friend isn’t always a great idea, especially when he’s Noah Lockton – the sexiest, most famous new talent on the planet. When 21-year-old small-town photographer Chloe Campbell is offered the chance of a lifetime – to join her celebrity childhood friend Noah on tour as an exclusive blogger for a New York magazine – she’s certain both have put what happened four years ago behind them. But his eyes still burn; his voice is still a jackhammer to her heartstrings; all his songs are about her. Is it possible that that night still haunts them both?

The music industry is a machine, spinning hype and rumors as much as his records. It’s not just Noah’s girlfriends who’ve got it in for Chloe (there’s no stopping the Twitter-obsessed, cat-loving pop-star Courtney Lentini for starters). Pretty soon, the jealousy and media frenzy surrounding these so-called-friends takes a life-changing turn and it seems making love means making enemies at every turn. When tragedy threatens to pull the final curtain on their relationship, both Chloe and Noah must make a choice. As much as this world leaves them starstruck, is living their dream really worth living without each other?

A story of lifelong friendships, love and hope, set in a world of celebrity, fame and social media gone very, very wrong.

Let me just say that any book that has a cat named The Great Catsby must be okay reading. Right?

Now, the fact that the cat’s owner seems a bit too dim-witted to have conjured up this name with any literary allusion is something we will overlook. Because the cat? Is named THE GREAT CATSBY.

The rest of the book has a sort of nostalgic sweetness to it, along with some super hot headboard rockin’.

Noah and Chloe had that one night together, after which their friendship took a slight hit. She wanted comfort, he wanted her, and despite the fact that she had a boyfriend and that she and Noah had been friends forever, they rocked the – er – tree house together.  Quite magnificently, in fact.

But Chloe is nothing if not tentative and cautious when it comes to making any sort of romantic commitment. She has a boyfriend, but his gainful employment might just be of the illegal variety. And he isn’t very nice.

Chloe and Noah’s friendship, though, is rock solid, and the scenes of the two of them together pre-romance are some of the strongest in the book. That isn’t to say that the romance is weak; it’s hot and exactly what New Adult lit is all about. But the core friendship is so nicely written that it helps overcome some of the novel’s weaknesses (the contrived problems that arise in the romance would be Exhibit A for weaknesses).

As Noah’s career takes off, he’s able to bring Chloe along to document his travels. She gets to watch her best friend ascend to fame, if not quite fortune, pursuing something he loves to do. It’s a rough time for her, although her sunny disposition keeps most of the ill will at bay. The scenes with Noah’s struggles to be his own person in the face of a music industry fame machine are interesting and will make you look differently at those who win American Idol and its ilk.

As for The Great Catsby … well, you need to read to find out about him.