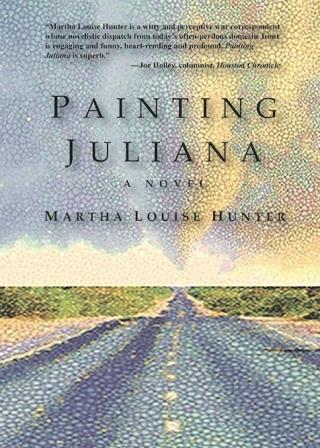 Faithful readers, the girding of loins must commence, for this book will take you on an emotional ride that will course through just about every feeling you have.

Juliana Birdsong is your typical eight-year-old with an obsessive-compulsive mother who’s too paranoid to leave the house. Making double-lined, black-out drapes to protect their home from the outside world, her mother only looks up from her sewing machine when Perry Mason comes on TV – the type of successful man Juliana should marry if she wants to get anywhere in life. But Juliana has other things to worry about. Night after night, she’s awakened by a terrifying dream where she’s chased down a long, tapering highway on the back of her father’s motorcycle heading for an enormous, twisting funnel cloud that waits on the horizon. Even after locking it away inside her bedside drawer, Juliana wonders if there are parts of the dream she hasn’t seen yet. Years later, she finds dynamic trial lawyer, Oliver Morrissey and she marries him for love. Life is going reasonably well for the priviledged socialite – that is, until she’s faced with losing everything, including her children. Stepping out of her Lexus, Juliana peels off her Chanel sunglasses and glares up at her childhood home that’s now smothered in ivy. Inside, there’s only her estranged father left, who she’s sure caused her mother’s death. Moving in, she discovers a nude portrait of her with an odd set of tiny red footprints on the ankle, and another surprise she’s not expecting: Her father has Alzheimer’s and he needs her. Plus, a shipment of mysterious oil paintings arrives, all with his signature. When Juliana puts a brush in his hand, it sets off a surreal time warp and the canvases eerily transform, painting a different picture of the parents she thought she knew. As tragic secrets emerge that mirror her own, Juliana’s old demons come back to haunt her. Consumed with his care and desperate for her old life back, the dream is still chasing her and it’s catching up fast. Just when she can’t run any faster, the funnel cloud is waiting on the horizon, twisting even faster than before.

Got all that? It has a little bit of everything, doesn’t it? Even financial intrigue, but that comes later.

Here’s the thing, though: I don’t think the summary really tells you what this book is about. Sure, it lays out the basics of the plot, but Painting Juliana is about so much more than that.

You know that trite phrase about a woman’s journey, etc., etc., blah blah blah? This here is a WOMAN’S JOURNEY. We meet Juliana as a frightened eight-year-old, unable to sleep because of a recurring nightmare, and we end with a pushing forty Juliana who finally breaks free from all that the nightmare represents.

And throughout it, we question her, and we judge her.

Juliana’s marriage to successful alpha male Oliver is enough to make anyone cringe. It represents the proverbial selling of her soul in exchange for financial security. From the shiny Lexus to the routine beauty maintenance, Juliana is the stereotypical pampered Texas housewife. She is snooty to those she believes beneath her, and she has little patience for Oliver (not that anyone, even Job, would). Her redeeming quality is that she is a good mother to her children.

When Oliver takes away everything Juliana became – a wealthy socialite and stay-at-home mom – she has to reinvent herself. In Juliana’s case, “reinvention” means returning to the person she was pre-Oliver. She befriends the town pariah, she attempts to steer her children clear of the inevitable doom that will accompany their sense of entitlement, and she even realizes her part in the destruction of her marriage. It’s painful to read at times. Just when she thinks she has it together, that storm from her childhood nightmares swoops in and reminds her that she controls nothing but herself.

Oliver, in danger of becoming a stereotype himself, turns out to be wildly entertaining. In fact, the book is at its best when he’s around. He’s a snake and a scoundrel, selfish and self-involved, but he’s darn fun to read about. Oh, sure, you’ll hate him, but you’ll be wearier of Juliana’s naïvete and gullibility. Oliver is one of those men who truly believes – from his styled hair to his Italian loafers – that he is above reproach. Juliana veered from the script for their lives, and she must be punished. You almost feel for the big lug at the end.

Juliana’s family is part of her recovery process – recovery in terms of reclaiming who she really is. She has to make peace with her father, her brother, and even her deceased mother. She needs to recapture her inner spirit and sense of self.

Fortunately, Martha Louise Hunter makes her main character someone with whom we can empathize, and that in turns keeps us turning the pages.

This is an interesting, entertaining book. Don’t pass it up.